Rocester (Ro-Stuh) is a tiny place to have a football team, even at this level. It’s so small it’s actually a village rather than a town. Its official population is 1,431; the nearest major connurbation being Uttoxeter, four miles away. It lies in rural East Staffordshire, and despite it’s size has quite an interesting history. A Roman fort, founded in 69AD, lies where their current Hillsfield ground is, hence the nickname. The fort served as a half way point between Derby and Newcastle under Lyme.

Another fine feature of their ground is that it is loomed over by a very beautiful and imposing Arkwright Mill, dating back to the eighteenth century. The former water-powered cotton mill turned Rocester from a quiet agricultural village and parish to an important trading place, thanks also to its canal and road access. The mill only closed in 1985, by which time a new big name in industry had landed in the small rural village, JCB. Yes, the WORLD headquarters for JCB lies in little Rocester. The population of JCB in the daytime is probably more than the village it lies in.

Rocester lies about 12 miles east of Stoke a few miles off the A50. After passing the enormous JCB factory you enter a pleasant sleepy-looking village that brings you out to Richard Arkwright’s Mill.

You can see a Hillsfield floodlight poking out from the top middle of the picture! Just round the corner is a sudden hairpin which is the entrance to the ground and takes you down a mud track to an old barn with an old sign which says Hictons – Retailer of Jeans.

The Mill is just to the front of this and to the side is the entrance to the ground and welcome sign. There is a lot of grass and gravel parking and a ‘spare’ pitch. I say spare, but it actually had three floodlights, which you can see in the pic.

The entrance to the ground was through two turnstiles at the bottom corner of the ground. It was a perfect night for some non-league football;  a balmy late summer night with the whole of the season still ahead, the sun setting over the Arkwright Mill providing a picturesque background to the action in front of us.

It was both teams’ second game of the new MFA season. Both had lost their opening games at home, Rocester to Studley 1-0 and Market Drayton 2-1 to Coventry Sphinx. Rocester are stalwarts of the MFA, being founder members in 1994. They have twice gone one higher with promotions to the Southern League Midland and Northern Premier League Division One, but both were short lived and in the case of the latter, disastrous. The club are an impressive 131 years old but most of their history was played out in local leagues such as the Stafford Amateur League and Uttoxeter and District League. In the U & D League they beat RAF Cheadle 14-2 away in 1952/3!

Market Drayton, conversely, are a fledgling club founded in 1969. They were called Little Drayton Rangers FC until 2003 and last year was their first season in the MFA after promotion from the West Midlands Regional League. This is the club’s best ever spell.

As you go through the turnstiles the very impressive clubhouse is down the left side, with ample seating and big screen tv and the Sky Sports results service playing throughout the night. It was very welcoming, but as with a lot of football clubhouses the real ale was non-existent. (You’d think the sort of people who watch non-league football, especially groundhoppers would not just all be real ale drinkers but actually members of CAMRA. What is it with the Heineken and John Smiths choices?) Myself and Tom (fellow groundhopper from the Port Vale hinterland) had to plump for the default choice in such circumstances where there is no choice, and have a Guinness each.

Next to the clubhouse is the snack bar serving nice drinks and food at good prices. I hardly ever indulge in ground food but I had one of Tom’s chips from his sausage and chips, which was nice. It is known as Montray’s, after the two cooks Monica and Tracy, and judging from the programme they had a good reputation.

Next to this is the main stand, a nice 222 seater, three blocks, each with four rows of 12 and two rows of 13 (I did the calculation while I was there, probably looking like someone with learning difficulties or at least behavoural or social problems, scanning the stand with ticcing mouth and head-nods.)

Both ends were just the standard perimeter bar, the end overlooked by the mill had quite a big swathe where the kids could have their own kickabout. On the other side there was a small bus-shelter stand, quite low and capable of housing about 50 comfortably. 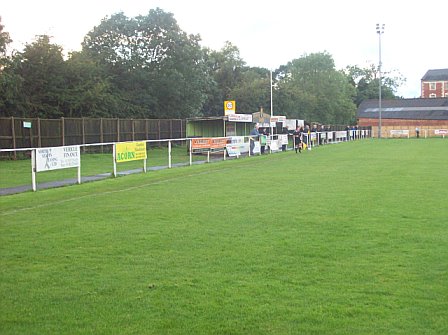 I really liked the ground. It was in a wonderful rural setting, with great light and a great atmosphere. The game was a classic, too, and a great advert for the Midland Football Alliance. I thought the quality of football at times was superb and could have graced league several tiers above them without looking out of place. Market Drayton started off the livelier and made it count with a gorgeously struck free-kick on 17 from 25 yards, coming in off the crossbar, followed a minute later by a stooping header off a well hit corner. It looked like it could be a right Rocesting for the home side.

Rocester were back in it within five minutes, though, with a classic free-kick of their own, hammered into the top corner with impudence. The second half was a bit scrappier and hectic than the first but still eminently watchable, and Rocester got their equaliser with another strike of extremely high quality, a Gerard-esque daisy cutter from 20 yards out in the middle, searing the bottom corner of the net.

It was a great night out. Two matches in the first four days of the season! It doesn’t get much better than that. 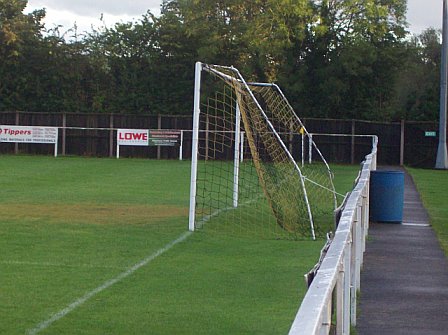 P.S. This is one for the über-nerds. Nice nets, don’t you think? Another great thing about non-league grounds is that they come with their individual style of stanchions /nets. They haven’t been visited by the Net Gestapo, insisting that they get the big square white nets with no back stanchion. In one of the goals the back stancion actually bent in three places, I don’t think it was supposed to as its twin had just two kinks, like the old Chelsea nets. And the colour coding to match Rocester’s kit…ahhhh.

I live underground, occasionally popping up at non-league and Welsh grounds. I live on a diet of insects, small rodents, nil-nils and post and pre-match angst.
View all posts by thegroundhog →
This entry was posted in Groundhopping, Non-League, Travelog. Bookmark the permalink.