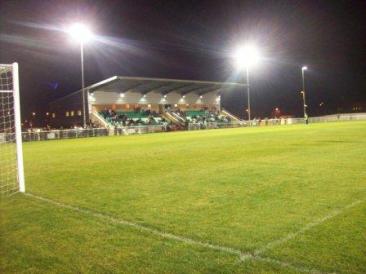 This was my second FA Cup tie in four days and second new ground. I do love the FA Cup and the magic therein. Nantwich had gained a very impressive 2-2 in the first game on Saturday at Harrogate’s Wetherby Road ground, despite being two divisions below them. Not only that but Nantwich have only just achieved promotion to step 4 and Harrogate are clear top of the Conference North with an 8 2 0 record.

So I was rooting for the Dabbers tonight, always keen to see cup upsets. I was quite excited about seeing their new home, having recently seen them in their last ever season in their traditional Jackson Avenue (Click here to read) Jackson Avenue was a much loved ground full of character and over 100 years old but while the bulldozers impassively prepared the luxury flats on it, the finishing touches were being made to their new 3,500 capacity Weaver Stadium home.

Nantwich were founded in 1884. They won the FA Vase in 2006, 3-1 winners against Hillingdon Borough at St Andrews. Their last season (last season) in Jackson Avenue saw them promoted from the North West Counties Division One to the newly regionalised Unibond League division One, the south section. Their last game there against Squires Gate saw a crowd of over 1,000! They have made a good start in the higher altitude including a recent 4-0 away win at Brigg Town.

Harrogate Town were founded in 1914 and have only recently started climbing the pyramid to any great level. Since the early 80s when they installed floodlights at their ground they have been gradually crawling up the pyramid, and in 2004 were founder members of Conference North. In 2005-6 they finished fifth and lost out in the play-off final to Stafford Rangers 1-0. As stated earlier they have made a great start so far with only 6 points dropped from 33.

Tom, my oft-time hopping companion, called round at 7 o’clock – the agreed time, but pushing it a bit.  Added to that was the fact that we had both done that thing that blokes do quite a lot – leaving for somewhere with a casual and arrogant swagger, knowing that we’d just find wherever we were going. It’s only when you approach the destination that you realise how staggeringly stupid it is, not to just print off directions on the website. The proximity to 7.45 suddenly alerts us to this fact, and also the revelation that neither of us has a good sense of direction!

After some slightly angry 3 point turns and a stop off in a garage, we eventually made the Weaver Stadium at 7.55; only the second time ever that I can recall being late for a game. I wasn’t happy, but the Gods were smiling on us. Unluckily for the players, they weren’t smiling on the Weaver Stadium! A suspiciously dark and quiet stadium told us the floodlights were out. After some intermittent illumination, and the time at 8.20pm, 473 people were stood in the dark, pretty certain the game would be off. Ladbrokes had stopped taking bets on it starting.

However, just after 8.30pm, the lights had shimmered and wobbled their way to full lux and the game kicked off. The atmosphere wasn’t great to start with, on account of people worrying about the next black out, I think. The tension was tangible as everyone willed them to stay on.

Obviously, the contrast between Jackson Avenue and the Weaver Stadium was huge. I guess it’s like moving from a much-loved Victorian family terraced house with a bit of damp and some rotting timbers, to a brand new semi with immaculate lawn and smooth walls. The latter is quite exciting with its crispness and its modern facilities (don’t mention the lights), but there must still be quite a yearning for the warmth and character of the ramshackle old ground.

The car park was plenty big enough, in front of the main stand, which was a beige-bricked quite attractive structure with about 500 green seats. 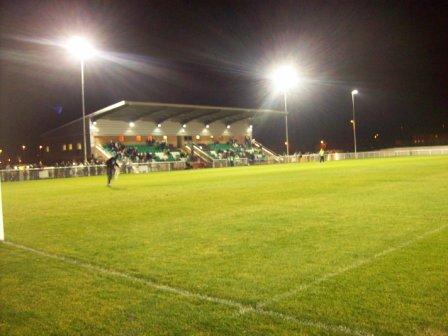 A nice feature of the new build was the perimeter fence. Rather than the traditional metal pole was a plastic (or perspex or something) thick bar, a bit like drainpiping, with a lattice effect filling in underneath. All pure white. Both ends were just standing behind this bar with no elevation.

I apologise for the quality and number of pictures. My camera requires you to keep your hands still for about 3 seconds while it does its thing to capture enough light for a decent night pic. It’s a sort of stillness unattainable at a football game in October! Night matches will, unfortunately, remain a barren land for good photography on this site.

The side opposite the main stand had a few steps up terrace, the middle bit covered. 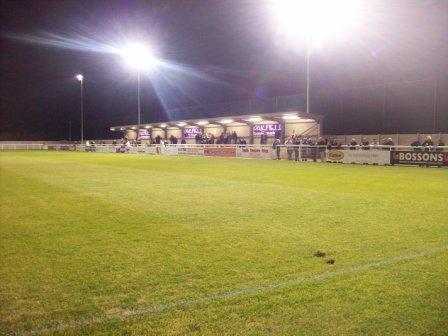 I was very impressed that almost 500 were here. There were quite a few from Harrogate, too. Harrogate started off apace and looked like they wanted to put a quick end to their lower league challenger’s FA Cup pretensions. Despite some fast and fancy play, they lacked penetration though, and Nantwich’s defence was solid. The longer it stayed 0-0, the more you thought an upset might be on the cards.

Half way through the second half Nantwich brought on ‘The Pav’, quite obviously a favourite amongst the Dabbers – Pavol Suhaj. The script was there for the popular tall long-haired Slovak to score a shock winner in the 90th minute! Don’t get excited – no one was reading my script. Harrogate scored after 80mins, a long shot was only parried by the Nantwich keeper to Hume, who scooped up the rebound.

It was the Pav, though, who gave Nantwich a somewhat fortunate lifeline, when he went down in the box five minutes from time, falling with a dramatic flourish. There was a big kerfuffle after Griggs put away the penalty, in which players, refs and linesmen argued for quite some time. This culminated in the peculiar decision to have the kick retaken. Griggs kept his cool brilliantly to slot home an identical second, much to the relief of the incensed Dabbers fans.

Extra time, and courtesy of the floodlight failure about a midnight finish, beckoned until four minutes into injury time Dinning tapped home a fierce cross into the box.

It was a good evening’s entertainment and excellent to see such a large crowd. Once the electrician has been in, it will be a fine stadium to take Nantwich forward.

I live underground, occasionally popping up at non-league and Welsh grounds. I live on a diet of insects, small rodents, nil-nils and post and pre-match angst.
View all posts by thegroundhog →
This entry was posted in Groundhopping, Non-League, Travelog. Bookmark the permalink.