Posted on December 5, 2009 by thegroundhog

This match was very much a ‘what the hell am I playing it’ excursion, joining an embarrassingly long list. Driving to Birkenhead on a school night, in driving rain, to watch a Leek performance every bit as awful as the dank weather. And I didn’t even have my first choice camera, so my pictures were awful, too.

Cammell Laird were founded in 1907 as Cammell Laird Institute, named after the shipyard company in Birkenhead. They started out playing at Tranmere’s Prenton Park. They spent from 1948 – 2004 in the West Cheshire League, so only recently have played at a high level of the pyramid, being the first team to be back to back champions of the North West Counties Leagues Two and One in 2004-05 and 2005-06.

Their ground is very easy to find, exiting the M53 at junction 5, following the A41 and then B5136 for a short while, with the ground lying between the B5136 and the Rock Ferry Bypass. There is ample on street parking on St Peter’s Road, alongside the ground.

Kirklands has a bit of a ramshackle feel to it. As you come in from St Peter’s Road there is a clubhouse, coffee bar and small stand, three seats high, but very shallow. 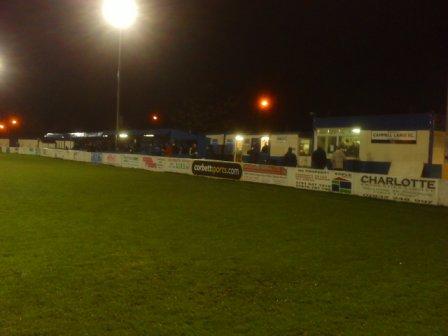 There is another small seated stand the other side next to a reasonably sized covered terrace. 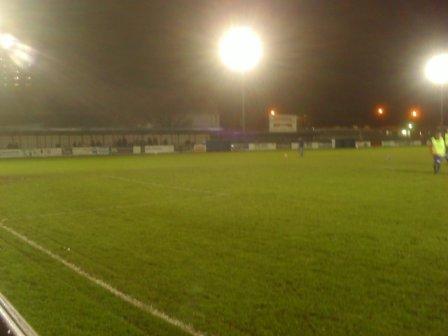 I don’t have a lot more to say about Kirklands. My pictures don’t do it justice. It was a miserable night for a Leek follower, as once again their performance was lacking in all departments, although both Laird goals were as a result of fortunate deflections. The Camels were playing under a new manager and chased absolutely everything, which was extremely irritating to watch. Whenever Leek got the ball, a leg or foot (often a hand) appeared, to take it back off them.

It reminded me of watching Brighton in the 90s. There’s a lot to be said for watching neutral games – it’s generally a lot less frustrating.

I live underground, occasionally popping up at non-league and Welsh grounds. I live on a diet of insects, small rodents, nil-nils and post and pre-match angst.
View all posts by thegroundhog →
This entry was posted in Groundhopping, Non-League, Travelog and tagged Cammell Laird, Kirklands, Leek Town, Non-League, unibond league. Bookmark the permalink.