Posted on October 1, 2016 by thegroundhog

You can’t get a more Welsh sounding name than Brymbo, so why does Billy Connolly say it in my head? Brymbo also sounds like it could be Frodo’s great grandfather, with his father being Bilbo and grandfather Bungo.

Brymbo FC are the last Welsh National side with a stand I’ve left to do. As far as I know the others I haven’t done are railed pitches. The Steelmen were founded as Brymbo Steelworks FC in 1943, have won the Welsh National League no less than fourteen times and have played at Cymru Alliance level (step two).

Brymbo Village is a few miles north west of Wrexham and the community area, which also includes the villages of Tanyfron and Bwlchgwyn, had a population of 3,482, when last counted. The villages have a strong coal mining history with Brymbo Steelworks running from 1794-1990. The village lies close to Offa’s Dyke. 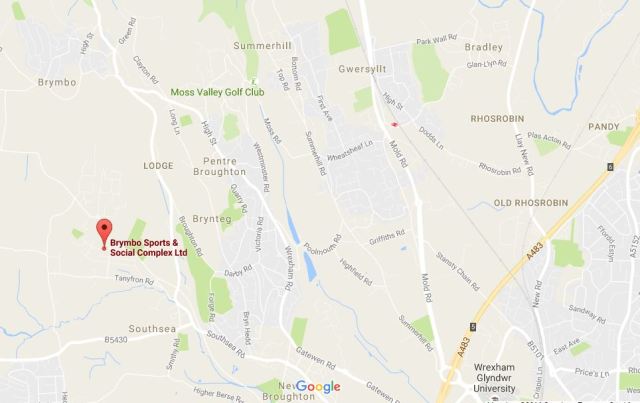 Brymbo FC actually play in Tanyfron, a village just down from Brymbo. The ground is part of the huge Brymbo Sports Complex, with a large cricket pitch with stand on the right as you enter, off Heritage Way. To the left is a bowling green, with four tennis courts behind. A statue of a red dragon greets you as you drive part the large clubhouse and concomitant car park behind.

The Crick, the name of the ground, is up high above the car park accessed by steps or, for a few select cars by a winding road round the back. There are actually two full sized pitches side by side, with The Crick being on the left.

I don’t expect a programme from WNL games, making it all the more pleasing when they do surface. Also good to see a small entry charge – £1.50 gets you in, inclusive of the decent match programme, and free for children.

The ground looks smart, fully railed and paved with a seated stand on the far side, with exactly 50 seats in a three row 14,18,18 formation. Opposite this is a tiny covered two-slab terrace. 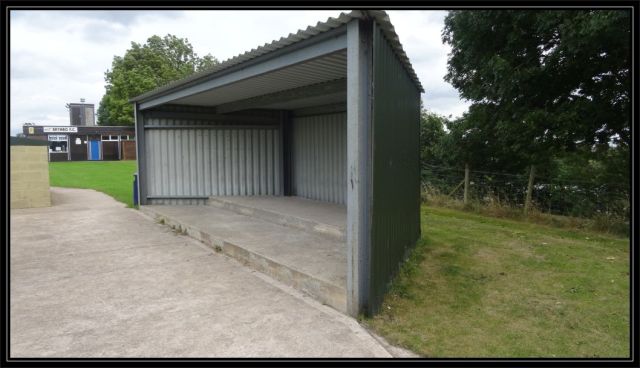 Brymbo and opponents Llay Welfare, also a former mining town and team, were both midtable, but with Brymbo having beaten them 6-1 in a cup game two weeks hence. Today’s game was a lot closer and Llay really should have had a point but couldn’t convert their chances, which were a lot better than the host’s chances. The Brymbo keeper also played a part making some magnificent saves, especially the one in the first half from a sweetly struck free kick. 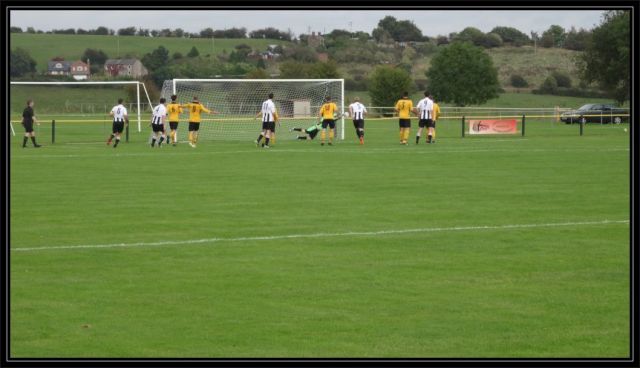 Another superb save by the Brymbo keeper.

Brymbo took the lead midway through the first half with a stunning strike, cutting inside the Llay left back and wellying a 25 yarder into the nearside top corner. This sublime strike separated the sides until the dying moments when a breakaway attack ended with a cross headed in at the near post for 2-0. Unlucky for Llay but they must finish better. The Crick is one of the better grounds in this league, well kept with a good clubhouse and matchday programme.

I live underground, occasionally popping up at non-league and Welsh grounds. I live on a diet of insects, small rodents, nil-nils and post and pre-match angst.
View all posts by thegroundhog →
This entry was posted in Groundhopping, Grounds, Travelog, Welsh football and tagged Llay Welfare, The Crick, Welsh National League. Bookmark the permalink.