from The Mechanics, Jepson Way, Blackpool

The choice was between AFC Blackpool and Nelson, two of the four I’ve left to visit in the NWCL. Three of them are exactly the same distance away, to the mile. The two mentioned and Squire’s Gate. The other, Carlisle City, is a light year away.

I plumped for the lower division offering at Blackpool, attracted by the lowly positions of both teams. Blackpool were fourth bottom, but visitors Ashton were miles adrift in bottom place, 16 points under the relegation zone, with their only win in 26 coming at today’s reverse fixture, a 3-0 win on 20th August. Other than that they’d recorded two draws and 23 losses.

AFC Blackpool were relegated from the top division last season. They used to have the much more charismatic name of Blackpool Mechanics, until 2008, when they merged with Squire’s Gate Junior to become the tediously entitled AFC Blackpool. They started out in 1947 with the even better name of Blackpool Metal Mechanics. Their ground and nickname still refer to their mechanical history, although their badge depicts a seagull?!

The Mechanics Ground was larger than expected, and full of character, with a covered stand on each side. Behind one goal an ancient fascia for some auto repair place, bearing just the letters UTO, was affixed to rusted girders in the corrugated-sided three step terrace, complete with crush barriers.

Down one side was the main stand, a charming decrepit maw with 100 or so crooked orange and red teeth. 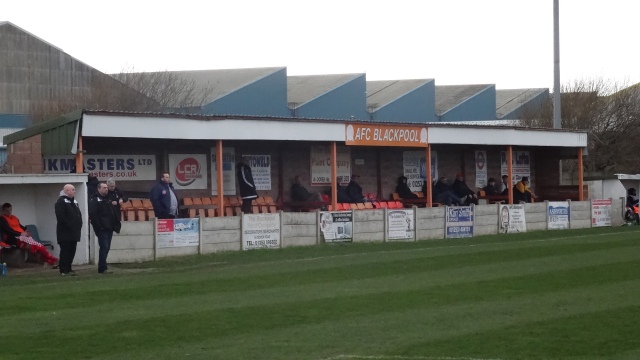 Behind the other goal a smaller, more basic covered terrace held the half dozen AFC Blackpool Ultras, with their many flags and drums. The final side comprised some more seating, grey hued, in two rows, in front of the clubhouse and changing rooms. 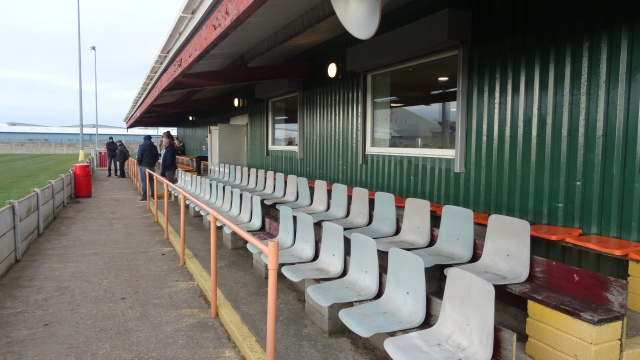 The setting was quite desolate, with nothing much to see on any of the four horizons. This lack of height may be explained by the next door Blackpool Airport, that brought to the ground the noisy but strangely comforting sound of jet engines, interspersed with the sound of helicopters and turbo props.

There are three football clubs pretty much next to each other, Squire’s Gate in the division above Blackpool, lies adjacent to Blackpool Wren Rovers of the West Lancs League, who incidentally have a smart ground with stands and floodlights. Just over the road is AFC Blackpool.

Today’s game turned out to be a joy to watch as, amazingly, Ashton Town came away with a 5-0 win; their second of the season and a double over their crestfallen hosts. The first 40 minutes gave little clue as to the outcome, although Ashton did seem surprisingly ept considering their league position; they certainly weren’t the hapless bunch I was half expecting, given their five point haul from 26 games.

The Mechanics opened the more brightly and came close within a minute, but then struggled greatly to create chances. Ashton were the slightly better team in an abjectly bad first half, where it looked like the skill level on offer was to preclude any creation of chances or goals. I did wish I’d gone to Nelson after half an hour.

However, a palpable change occurred just after the half hour. Ashton, with understandably diminished confidence, started to believe. They weren’t losing, and were actually playing the better football now and getting close to scoring. I think they sensed that this might be the game where their fortunes change. The pressure finally became a goal on 41 when Robinson was one on one with the keeper and very coolly hooked it over him. Ashton were in the lead! The away dugout exploded, there was screaming, disbelief and pure joy. Birds flew out of the nearby trees, as one. A plane taking off from Blackpool Airport dipped its wings. If you listened closely you could hear a Wookie going Nggggurrg-h-h-h-h. Four minutes later it got even better when, bearing down on goal, Ablewhite held the ball up on the edge of the area, looked for options, then full of new found confidence, hammered it into the top middle. No more than they deserved, but surely more than they ever imagined?

In the second half, I expected a slow capitulation of their lead, in the manner of all football teams lying bottom, low on confidence and luck. I was very wrong. Ashton grew in confidence in the second half and were by far the better team. They missed three sitters to make it 3-0 before winning a penalty. Penalty converted, it was almost exhibition stuff, as Blackpool didn’t know what was happening to them.

One of Ashton’s players, a small older guy with receding but long hair, was being ribbed by the Blackpool Ultras behind the goal, (all five of them, complete with flags and drums), by the chant:

The fourth goal was a sublime cross by the star of Twins and Romancing the Stone, which set up on a plate a far post header from Tyrer, a yard out, for 0-4. The diminutive but man-of-the-match contender owned the Ultras, with his celebration, in which he sang back to them Dan-ny De-Vito, Dan-ny De-Vito! The Ultras acknowledged their dabbing and were good humoured about it. Touché.

Danny came off and was rightly buzzing from his and Ashton’s performance, but there was still time for another. Again, great passing down the left, with the ball being passed square to Munro, who smashed it in the top corner, from 15 yards. 0-5. Could’ve been 0-8. Ashton were superb – Blackpool weren’t great but were unfortunate to play Town on the day when it all came right for them.

I really loved the Mechanics Ground, unsung among groundhoppers but definitely one of the more charming in the NWCL. Good luck to both teams for the rest of the season. 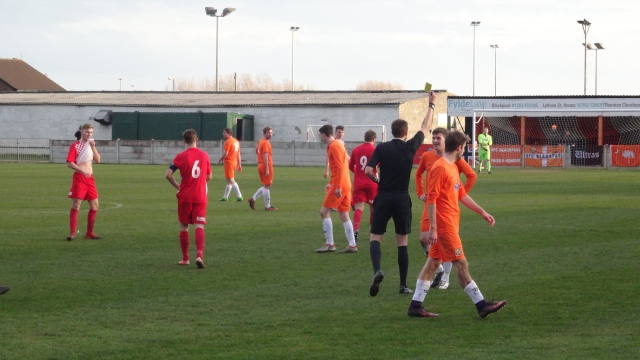